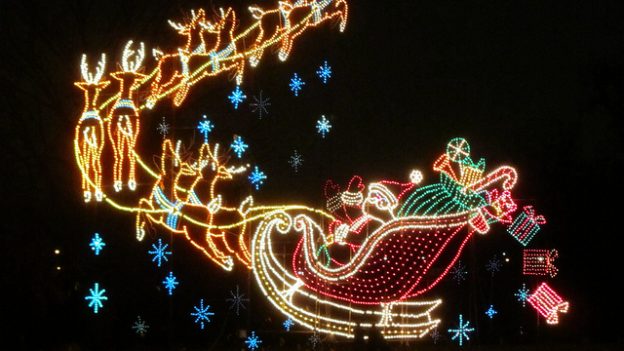 Every year our controllers help guide Santa Claus through UK airspace, but that’s only part of the story. His journey through UK airspace has to be carefully planned, taking into account his delivery schedule and the weight of the onboard cargo, weeks in advance.

Here’s an insight into that work, as produced by Karen Bloom from our Operation Analysis team…

This Christmas Eve Santa will be doing his usual round of present delivery. As he makes his way around the whole of the UK, he is allowed in and out of controlled airspace as much as he desires. We also assume that Santa will not cause incidents with any other aircraft and he is not affected by wake turbulence.

On average, children up to the age of 14 years believe in Santa. According to the 2011 census, the estimated population of children in the United Kingdom between the ages of 0 – 14 is 11,101,000. However, since not every child up to the age of 14 will believe in Santa or will have been good enough to deserve a visit, his work load will be reduced to 85% of this total, resulting in 9,435,850 children requiring a present. Based on the Office for National Statistics, 1.7 is the average number of children per family. This means visiting 5,550,500 families, assuming there is at least one good child per family.

Santa will enter UK airspace in the north and make a number of short flights within UK airspace before leaving via the south. Santa will land at a chosen roof and will deliver presents to all houses in a 10 mile radius. The United Kingdom has a surface area of 94,060 square miles. Assuming houses are perfectly and evenly grouped in 10 mile radius circles, Santa will have to make 9,406 stops; meaning he will visit 590 families (and 590 good children) per stop.

To complicate things even more, Santa is going to increase in weight after eating a mince pie from every home and the present pile will decrease in weight as gifts are distributed. From previous calculations we know that per stop Santa loses 800 kg in presents and gains 44 kg in mince pies! (Assuming 6 mince pies weigh 450g). This results in an overall loss of 755 kg per stop.

Once Santa has successfully completed his round, the weight inside the sleigh will reduce to a much smaller 423 tonnes – 421 tonnes of which come from consuming 5,550,500 mince pies.

Can ATC really create more value at an airport?

Is air traffic control a soft target for hackers?

You have neglected the increased weight of Rudolph after eating all those carrots. I’m also assuming that Rudolph has some kind of exemption from the Nav Lights rules what with just having a single red up front?