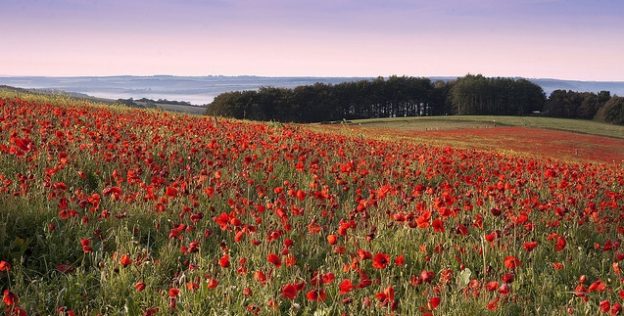 The Remembrance Day commemorations are always an important opportunity for national reflection, but especially so with this year marking a century since the start of the First World War.

The focal point is always the two minutes of silence at 11am and as such it’s hugely important that the time is kept as quiet as possible in respect to those who fought and died. Each year at NATS we play our part in making it so.

Together with the airports and airlines restrictions are put in place on aircraft operations as a mark of respect in order to minimise the risk of any noise disturbing the events in London or at any other local commemorations.

At Heathrow for example, for the few minutes before and after 11am we make sure there are no arrivals or departures, but the real time delay to aircraft is dependent on whether we’re working Easterly or Westerly Operations – something that hinges on the prevailing wind conditions.

About two thirds of the time we work Westerly Operations, and if that’s the case on Sunday any arriving aircraft will be directed by our Terminal Control colleagues at Swanwick Centre to avoid overflying the Cenotaph. If it’s an Easterly day, then NATS air traffic controllers will make sure there are no aircraft on final approach within 10 miles of the airport.

In terms of ground operations, airlines will avoid pushing back and starting their engines, while arrivals leaving the runway will be instructed to taxi on low power in order to keep noise to an absolute minimum.

On Armistice Day itself, Tuesday 11 November, the airport also invites airlines to voluntarily avoid pushbacks, start-ups or ground running of engines during the period 10.57 – 11.03.

Heathrow might be the world’s busiest dual runway airport, but NATS is proud to play our part in helping mark such an important annual occasion.

The future of the UK’s airspace

Well done NATS. It’s important that we never forget and continue to respect those who gave their life so we can enjoy our freedom today.

Yes Well done NATS and Heathrow, it is more important than ever now to remember. Point of order, please may I check my understanding, when on easterly operations aren’t arriving aircraft on final approach for Heathrow over Windsor, Bracknell, Ascot etc area? In this situation wouldn’t departing aircraft be kept away from the Centotaph during easterly operations?

This is stunning. Never knew about it until was at a Remembrance Service outside Holy Trinity Hounslow today (very close under the flightpath) and noticed the lack of flights around the 11am two minutes silence moment. Wonderful…thank you, thank you!

Jon is responsible for the ATC operation at Heathrow airport. Before Jon moved to Heathrow in 2007, he held the same post at Manchester Airport, where he oversaw the NATS involvement in opening of the airport’s second runway.