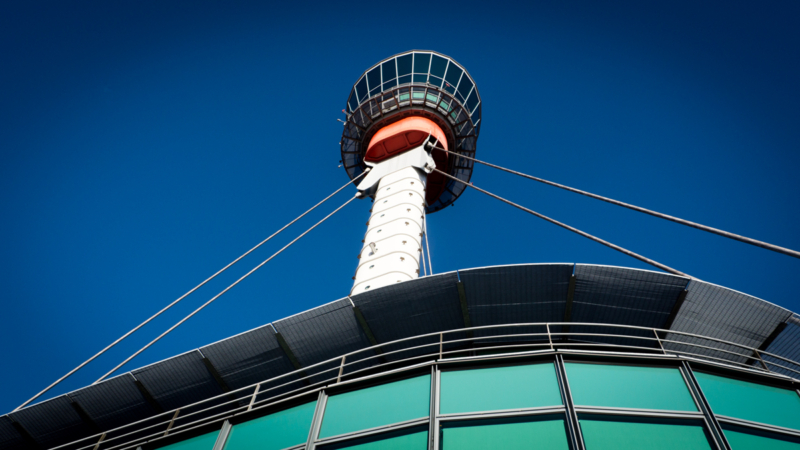 Heathrow is the world’s busiest two-runway airport, operating at 98% capacity, with over 73 million passengers passing through the terminals every year. That’s in addition to the £133 billion worth of goods, freight and cargo. The air traffic controllers (ATCOs) handle 1,350 aircraft on a daily basis.

No two days are the same for the ATCOs and other staff at the tower. The main challenge is to make sure that all these flights arrive and depart safely and on time. It’s a demanding job, so much so that  it can take up to three years to ‘go solo’ as a Heathrow controller.

Heathrow’s busy schedule requires four holding stacks where aircraft are queued to land during peak times. This is how an airport with constrained runway capacity can efficiently maximise the limited number of landing slots.

A BA 747 in front of the Heathrow Airport tower

A B777 at Heathrow Airport being towed

BA taking to skies over Heathrow

Jon Proudlove, NATS’ General Manger at Heathrow says: “Nobody in the world moves as many aircraft over two “strips of concrete” as we do at Heathrow and the team understands the importance and significance of a fully functioning Heathrow not just to the wider air traffic network, but to UK plc as a piece of critical national infrastructure. That’s what gives the team a real buzz.”

Jon has one of the best office windows in the world with a view from the tower, the highest visual control room (VCR) in the country, 87 metres above the terminals and taxiways. From here he has panoramic views of the London skyline – not that he has much time to sit back and take them in.

Eighty airlines operate out of Heathrow’s five terminals, serving 84 countries with everything from the giant A380 through to the much smaller E195 flying through the airport on a daily basis.

The environment in the tower is designed to be very calm, which enables the controllers to concentrate fully on the job in hand. Although a significant aspect of the operation is being able to look out of the window and interact with the aircraft visually, they can also operate “blind” with cutting edge support tools to help them run the operation, especially at times of low visibility. As the UK’s primary hub airport, Heathrow’s competition is the other big European hubs, so 24/7/365 performance is key to maintaining the edge.

Listen to NATS’ General Manager at Heathrow, Jon Proudlove, as he talks about Heathrow as a hub and critical piece of the UK’s infrastructure in this video clip.

Step inside Heathrow tower with our interactive 360 panorama

My name is Jamie Pearman I am age 14 and I attend Haberdashers Aske Crayford Academy and my dream job would be to work as a air traffic controller. I’ve read up everything on the NATS’ website and am so interested in all aspects of the job. I have read previously that there has been a tour of the tower and would like to know if there are any more tours coming up which I can attend. I would be very grateful of your reply. Thankyou Jamie Pearman

@Jamie
Thank you for your interest in NATS and becoming an air traffic controller. However, I am sorry but we are not able to arrange for you to visit a NATS air traffic control tower or centre. Control towers and centres are a safety critical environment where it is important for as few distractions as possible. With very rare exceptions, we only accept visits to our control towers and centres for business reasons.

Is there a tour of the Tower for the public. if so, when is the next date.

Nicky is a recognised expert in the Social Media Community. Tweeting as @Nickyhants, she is also passionate about Social Media on other platforms, recognising its potential, especially how it impacts on traditional marketing and PR.

Joining NATS as Social Media and Community Manager in April 2013, Nicky is using her experience to identify how to improve NATS’ use of the medium, working with key business stakeholders to create and implement a social media strategy.

Nicky lived in Australia for 10 years, has travelled extensively and enjoys learning about other cultures. She also enjoys history, visiting museums, reading, listening to music, walking her rescue dog and spending time with her friends and family.