For anyone who has seen the film ‘A Matter of Life and Death’, it’s easy to think that it is nothing more than a wartime love story (although it does have an interesting metaphysical theme). However, to aviators it is likely to mean just a little bit more.

For those who haven’t seen the film, David Niven plays RAF airman Peter Carter, on board a stricken aircraft returning from a bombing mission. His crew have bailed out but he is stranded on board the burning aircraft without a parachute (his having been ‘shot-up’, as they used to say). As the aircraft descends, he makes a final call over the radio to explain his predicament and makes contact with an American Women’s Army Corps radio operator. The bond they form in those few minutes lays the foundation for the remainder of the story (which I won’t spoil).

The aviators among us, even if we haven’t experienced such calamitous situations, understand the significance of those ‘disembodied voices’ on our lives. The reality is that most pilots never meet the vast majority of air traffic controllers (ATCOs) with whom we spend our professional lives communicating. And yet, these ‘virtual colleagues’ are as vital to our wellbeing as our ‘physical colleagues’ on the aircraft. From the beginning to the end of every flight, we are passed from one ‘disembodied voice’ to the next, to be held in their protection even for the most fleeting of periods. We entrust ourselves (along with those who have entrusted themselves to us) to these ‘unknown guardians’ without any reservations.

Like us, ATCOs are highly trained aviation professionals (many of whom also hold pilot licences of their own) and there is a mutual trust and respect between us. Just as, I’m sure, different airlines have different ‘collective personalities’ so do different air traffic control (ATC) organisations and even ATC units. Furthermore, as pilots we tend to operate into and out of a single, or a small number, of bases. Consequently, we grow to recognise many of the ’disembodied voices’ within UK airspace and especially at our home bases. It is inevitable that we feel a bias towards our ‘home team’ but, having experienced a huge range of different ATM providers in my 17 years of commercial flying, I truly believe that NATS’ ATCOs are the very best.

When I started flying professionally, much of the airspace in the UK Flight Information Region (FIR) and the London Terminal Area was controlled from a windowless building in West Drayton. On my early visits, the most striking aspect apart from the vast amounts of tweed was the sense of calm. ATCOs were dressed smartly. On the radio, the voices were relaxed (even in difficult times), generally without strong regional accents (as one might have guessed given the proliferation of tweed) and often gravelly; I always assumed after a genuine commitment to the commercial success of Golden Virginia or Benson & Hedges!

In more modern times, a visit to an ATC unit will be met with a far more casual style of dress – after all who is going to see them unless ATC is provided by video-link in the future – but the same air of calm. West Drayton has closed and the same services are now provided from a light and airy building at Swanwick in Hampshire. On the radio, the voices are slightly higher paced, perhaps as airspace is far busier than it was 17 years ago and airtime is a premium. There are myriad of regional (and overseas) accents and, as far as one can tell, no ATCOs smoke!

However, none of this changes the basis of our relationship. There are times when ATCOs, our ‘virtual colleagues’, become an additional and welcome member of the crew. Thankfully my aviation career has been reasonably drama-free but, on one occasion the ATCO’s contribution was timely, relevant and most welcome.

I felt what they call the loneliness of command when our destination closed twice in a short period of time because of two, separate aircraft emergencies. We had already started our approach when it closed for the second time. We now had little fuel in addition to our final reserve quantity. I’m sure that many other aircraft were in the same situation. Believing in the law of fastest finger first we immediately told the ATCO that we were on minimum fuel and we’d likely need an immediate diversion to X. We had already discussed this as an option after the first closure; we call it ‘thinking ahead’, some call it pessimism. His response blew us away: “Standby….. (Pause for 10 seconds) runway in use at X is X, surface wind is X, QNH is X, turn right-base heading X and contact X approach on X. They’re expecting you.” Less than 10 minutes later, we were on the ground with our final reserve fuel quantity intact.

So what made this special? It was the fact that he knew he was about to become very, very busy with numerous crews, many of whom could find themselves in fuel distress simultaneously. Instinctively, just as we did, he knew what was required. He gave us the three pieces of information (runway, wind and atmospheric pressure) that we needed to validate our earlier decision and make an approach safely. Additionally, he anticipated our decision to divert by contacting the approach controller. He had dealt with one problem and was moving onto the next, probably before we’d even finished reading back our amended clearance. We were now faced with a period of intense workload to set up the aircraft for our diversion expeditiously but safely; again, starting the process before we’d even finished reading back our amended clearance. There were none of the usual platitudes from him; there was none of the usual thanks from us; we and he simply didn’t have time and neither party expected it from the other. I have no idea who that ATCO was and I doubt I ever will but, for this ‘disembodied voice’, my period of ‘command loneliness’ was short-lived.

Speaking to my ‘physical colleagues’ over the years, this level of service is delivered consistently during times of stress and some of them have known far more stress than I have described above. The contribution that UK ATCOs make to flight safety is unobtrusive, timely and apposite.

I expect to ATCOs, the majority of pilots sound similar; there are far more of us than them so how could they possibly come to recognise all but a few of us? So, what’s in a voice? For pilots, it’s the belief that they will perform well (like all good crew-members) when we need them to perform well.

From the original poster for ‘A Matter of Life And Death’

I once heard a customer step on board the aircraft and say that she felt as if she was already home. For pilots, as was cross the UK FIR boundary and hear the first home-based ‘disembodied voice’, we feel the same. 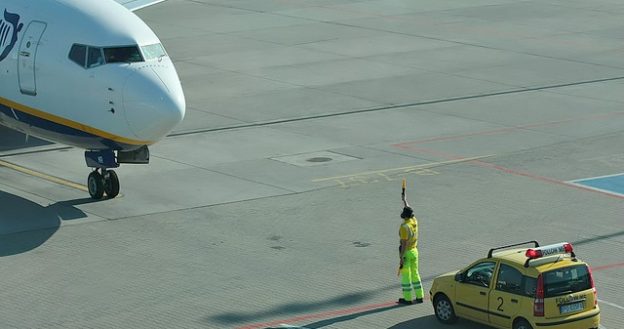 Capt. Daniel … glad to read such a nice article… paragraph starting with .>>>. I felt what they call the loneliness of command when our destination closed twice … was good to read… Superb.

Having studied Electrical Engineering and worked in the power industry for 5 years, Captain Daniel Hunn gained a place on the British Airways cadet scheme in 1997. Since then, he has flown the B737 and A320 family aircraft on the short-haul network at Birmingham and London Heathrow. He achieved his A320 command in 2008.

Dan is married with 2 daughters, lives in Cumbria and during fleeting periods of free time can be found on a bike or in the fells with his dog, Gyula.