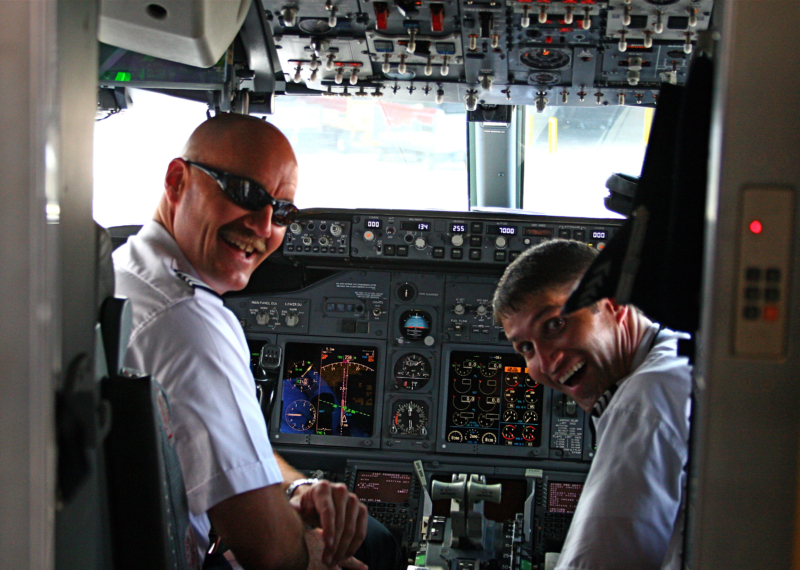 Imagine this: your job is to play the role of a pilot for anything up to 20 aircraft at a time in simulated computer exercises.

As an Aircraft Control Positions Operator (ACPO) that is what I do. The simulations department I work in here at NATS provides training and development exercises for our air traffic controllers. A number of us play the “pilot” on the other end of the controllers’ headsets in order to give the most accurate possible training experience. We act just like a pilot would, talking to them and asking for clearances (which means authorisation given by air traffic control) and converting their instructions into commands on the simulator, which in turn controls the movements of the aircraft on screen.

You could even say we are pseudo-pilots. In fact, some of the controllers call us “blippies” as we’re the ones moving the “blips” around the radar and 3D aerodrome visualisation screens.

We provide all kinds of different types of simulations for controllers – whether it’s for those controlling aircraft at high levels, or those who deal with low level traffic that has just become airborne or is heading towards the final approach into land, or those at an air traffic control tower at an airport. I specialise in the low level airspace around London.

Being an Aircraft Control Positions Operator is a very unique and important role as we are trained to simulate live scenarios for controllers so it is life-like to what they would experience in real operations room.

But it’s not just those training to become controllers. As part of keeping their licence active, once a year every controller has to undergo Training for Unusual Circumstances and Emergencies (TRUCE). Controllers can also practice and enhance their skills throughout the year to ensure they are well-rehearsed.

We are trained to learn standard aviation phraseology and, depending on the training level the controller is at, we can at times communicate less or even use sound effects – such as alarms in the cockpit or white noise for signal connection problems – to replicate genuine scenarios experienced by controllers and pilots. Simulating scenarios and emergency situations means the controller learns to ask the right questions and performs the correct actions to resolve the situation, as they would have to in real life.

Like an actor or actress, you have to portray emotion in an emergency situation to make it true to life and to train the controllers so they know what to expect and how to handle it.

We’re also very keen that commercial pilots come along for the emergency sessions too. It’s a great way for both sides to meet and gain a mutual understanding of how it feels to sit in the other person’s seat. If you’re a commercial pilot and would like to take part we’d love to hear from you so please get in touch via [email protected]

We’re also heavily involved in helping develop the training for any new operational technologies or procedures.

For example, for the development of Time Based Separation we worked closely with the project team to design simulations that would help make the introduction of TBS as seamless as possible. Now TBS is live, it’s on track to save 80,000 minutes of delay at Heathrow Airport, so it’s very satisfying to know we’ve helped make that possible.

Our department also works closely with the military in simulating airspace and operational changes. Preparing for and simulating airspace changes for the London 2012 Olympics, for example, were hugely successful. I’ve had the exciting chance to watch my colleagues providing an ACPO role for military jets; and seeing the fast-paced work in action was particularly impressive.

Seeing projects like these through from beginning to end is such a satisfying and rewarding feeling, knowing you’ve been a part of the development and improving the processes and capabilities of the traffic within the airspace, making it better and safer for all.

It can be quite a challenge on the simulator dealing with multiple aircraft, just as it is for the controllers. But it’s a wonderful and unique job to have.

I started my ATC career as an ACPO at West Drayton. Great opportunity which helped kick start my career as an ATCO.
Great memories.

This is very cool. Can you tell me (and the other readers) what kind of qualifications you need to be an ACPO, or Blippie?

Thanks for taking the time to comment. There aren’t any specific qualifications needed. Previous ATC simulator experience and knowledge of R/T phraseology is desirable, but not essential. Quick, accurate thinking, a clear speaking voice with excellent communication skills and good diction is necessary in this role; and it’s essential to have the ability to adapt readily to changing situations and procedures.

I used to be a pseudopilot before becoming an ATCO. If only I knew how exciting and important position it is. I would have asked for more money 🙂

Where are you guys based? Used to do this role, not so long ago, in the RAF for the Fighter Controllers in both the CRC and E3D aircraft for both the UK and allied nations. Would like to get back into synthetic training if I could, Cheers

I first joined NATS in 2008 working in the Simulator at the CTC, during this time I have helped to train new intake of Air Traffic Controllers and provide continuous training for valid controllers. I have also worked on some of the major projects such as the 2012 Olympics helping to prepare the controllers for increased traffic levels and when there have been airspace changes and equipment update, such as iFacts.

I have been lucky enough to attend a flight from Southampton to Glasgow in the cockpit of a FlyBe Dash 8, to learn what it’s like to be a commercial airline pilot to bring as much realism as possible when in the Simulator, as well as a flight with the Metropolitan Police Air Support Unit.