Game of drones – what now for drone development in the UK?

Last week you might have seen the news that NATS announced we had controlled the first ever flight by an unmanned aircraft in non-segregated UK airspace.

This represents a big step forward in the future development of drones and could in time open up the possibility of unmanned aircraft being used for cargo flights, search and rescue, environmental monitoring and all kinds of uses that I’m sure no-one can even imagine right now.

This was all part of Project CLAIRE – a SESAR (Single European Sky ATM Research programme) project designed to look at how to best integrate drones into controlled airspace. It’s important to note that we’re not talking about the small drones that the likes of which Amazon and Google want to use for things like parcel delivery.

On the whole, it is expected that those won’t need regular access to controlled airspace. Project CLAIRE was about identifying the procedures and processes to be applied to enable RPAS (Remotely Piloted Aircraft Systems) operations in controlled airspace and the aircraft used was a larger RPAS – the Thales Watchkeeper.

For there to be any real market for the use of large unmanned aircraft, they need to be able to access controlled airspace like other aircraft. That means we – as an air traffic services provider – need to work out how we can integrate them safely and with as little impact on our controllers and the existing airspace users as possible.

While the actual flight has grabbed the headlines, in some ways that was the easy part. Drawing on our existing experience of managing drones at the Aberporth range, it took NATS and our project partners Thales and NLR – with funding from the SESAR JU – over two years of hard work to reach that stage. Before that we marked up hundreds of hours of safety and simulation work because we needed to be absolutely sure that what we were going to do was safe under any circumstance – both normal and contingency.

One challenge to mitigate was that of a ‘loss link’ situation between the pilot on ground and the air, a unique challenge for unmanned aviation. The preparatory work included defining the actions to be taken by the pilot and the controllers in the event of that contingency, to ensure that safety was not compromised.

An on-going obstacle to the wider development of drones remain their inability to ‘detect and avoid’ other aircraft. Technology is quickly catching up with this problem, but for the time being there is no operational solution ready for market.

Mark Watson talking about the successful trial of RPAS in civilian airspace through Project CLAIRE at Aerodays2015.

With that in mind we put in place very specific precautions to bridge the gap. This involved creating a temporary ‘danger area’ immediately below the airway the Watchkeeper was flying in. This did not prevent any airspace users from entering that ‘danger area’ and did not segregate the airspace. However, what it did do was inform airspace users outside controlled airspace of the trial and allow the controllers the ability to deconflict the Watchkeeper from other airspace users in uncontrolled airspace if something such as an engine failure had occurred.

Obviously this isn’t something we will do routinely, but from the controller’s perspective the Watchkeeper was handled identically to a normal aircraft, with Swanwick talking to the pilot just as if he were on the flightdeck.

So where do we go next? It will be interesting to see how the RPAS industry evolves in the coming years and what regulatory framework emerges around that; it’s a debate we intend to remain fully engaged with. The UK government has set out an ambitious strategy that wants to see the full integration of unmanned and manned aircraft by 2020, so the next few years are sure to be very exciting. 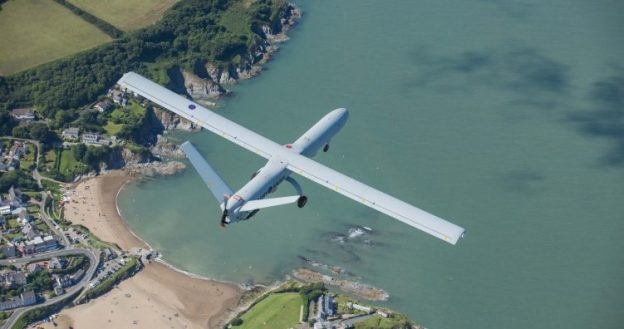 A new regulatory approach for Drones?

Ramón Raposo is a Research Engineer within the Research & Development Department at NATS, with a background in Aerospace Engineering and holding an international experience in airports and air navigation operations across the aviation industry.

In his current role, he has been managing and providing technical support to innovative and collaborative projects related to future Air Traffic Management concepts and Communications, Navigation and Surveillance solutions.