Anatomy of a flight strip – The Scottish FIR Perspective

Previously an interesting blog by Ady Dolan featured the anatomy of a strip, focusing on Heathrow and the electronic flight strips they use. At the Prestwick Centre the FISOs on the Scottish Information frequency work at the opposite end of the scale, with light aircraft solely outside controlled airspace.

We hand-write the aircraft details on paper strips. Our customers are mainly general aviation pilots, although we also work with helimed and rescue aircraft as well as the occasional commercial flight.

This strip featured was taken from the summer of 2014, when we provided a service to ‘Heritage1’, a Canadian Lancaster bomber that was making its way back to Canada after visiting the airshow circuit.

The layout and content of the strip is the same for every customer we work with, so I will explain the strip from left to right, with the boxes numbered for clarity.

3 – This is where we annotate the level of the aircraft, ‘1.3’ is altitude 1300ft and at the bottom 1012 is the regional pressure setting the pilot has said he is using. In the bottom right hand corner the ‘V’ indicates the aircraft is flying in accordance with Visual Flight Rules (VFR).

4 – These boxes are used to record the route the aircraft is taking using information provided by the pilot. In this case the pilot didn’t have an accurate position report on first contact, so ‘I/C’ stands for Initial Contact. The second box then has ’20 NTH NT’ which means ‘20 miles north of Newcastle’, then in the final box ‘SAB’ is the reporting point St. Abbs [Head], the small ‘R’ in this box means that the FISO asked the pilot to report passing this point.

4a/b – The split box, below the route, is where we record the time for each point. The upper portion (a) is used for the estimate (if given by the pilot) and the lower box (b) is used for the actual time, so we can see that ‘Heritage1’ first called on frequency at 1028, verified his position at 1031, then reported passing St. Abbs at 1040.

As you can see we record a fair amount of information on our FIR strips, but the big difference from Ady’s, and all other electronic strips, is that ours are still handwritten. Where possible, FISOs try to note down on the flight strip all the relevant information on the first call with an aircraft. However, pilots do not always provide us with all the information we require.

If you fly regularly and speak to Scottish or London Information, please try to have the following information to hand and ready to pass onto them in a clear and well-paced manner:

For example, one of our regular customers the Loch Lomond Seaplanes C208 floatplane would call us as follows; “GMDJE, a Cessna 208, Loch Lomond to Loch Lomond, overhead Alexandria 4 thousand feet on 1012, routeing Crinnan, Gigha, Rothesay then back to Loch Lomond, VFR, requesting a Basic Service.”

A well-paced message allows the FISO to complete the strip in one go, and saves time in the long run compared to talking fast and having to clarify or repeat information, remember we are writing as the pilot is talking!

If you are flying in the Scottish FIR at, or below, FL55 and outside controlled airspace, then give Scottish Information a call on 119.875mhz, we’re always happy to hear from you! You can also follow us on Twitter: @NATSScotInfo. 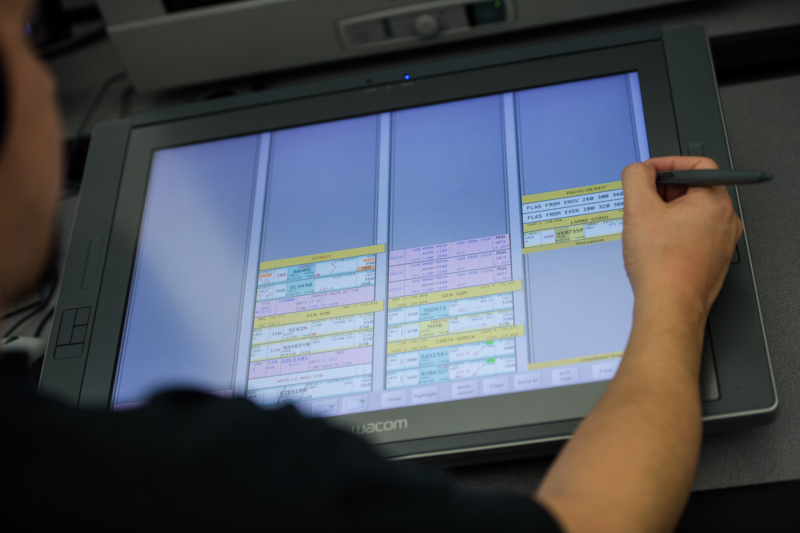 The arrival of the flight plan (FPL)

I would think it would allow for record keeping, for statistical analysis; to just use electronic flight progress strips, even on the GA level. in the daytona beach fl area; where the airspace is full of flight training; some ways of looking into optimization can be gained from electronic records of all flights; I do believe all audio is currently saved…

I was curious as to the time frame for comment approval and posting; I posted a comment over 24 hours ago; and don’t see it..

Donald – thanks for your comment. During the introduction of electronic flight strips at Prestwick Centre a few years ago the FISOs were involved in testing whether Scottish Information could be handled using electronic flight strips, and it was found that the hand writing function on the electronic panel was not good enough to keep pace with the volume and frequency of traffic calling up on a busy day.

As the FISOs on Scottish Information only work aircraft outside controlled airspace, there is no requirement for optimisation as technically pilots can do what they want, when they want, where they want; they do not even have to talk to us if they choose not to. It will be interesting to see what the future holds as advancements in technology allow hand writing on electronic devices to become more fluid and immediate, akin to writing on paper.

Great guys, were always helpful to us students flying out of EGPK

Jake joined NATS in 2007 as a Trainee Air Traffic Controller before moving to Prestwick Centre in 2008 as an Air Traffic Services Assistant working as a pseudo pilot in the Training and Development Unit.

Jake progressed to FSS (Feed Sector Specialist) working as a pseudo controller during simulations, before becoming an APS (ATC Project Specialist) helping to deliver projects in the training section.

His current role as a FISO (Flight Information Service Officer) involves providing information and assistance to pilots flying outside controlled airspace in Scotland and the north of England. In addition to this role, Jake also provides duty technical support to the Prestwick Centre Operations room.

Away from work Jake enjoys gadgets and has built his own gaming PC as well as tinkering with a Rasperry Pi every now and then, he also enjoys the great outdoors on offer in Scotland including ticking off the Munros, albeit very slowly!