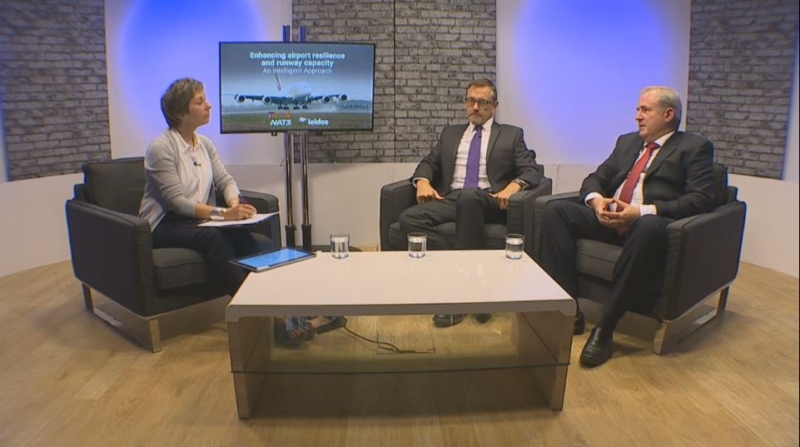 Last Thursday 21st September I took part in a discussion with Russell Akehurst from Leidos as part of a live broadcast about our Intelligent Approach suite of ATM tools.

We welcomed viewers from across the globe that included airports, airlines and ANSPs, as well as other aviation industry specialists. The interest from the audience generated a number of questions, some of which we sadly ran out of time to answer so I’ve provided further information below. Thank you all for your interest and for taking the time to send questions.

If you missed the opportunity to view the broadcast live then you can replay the discussion and watch the show in your own time from www.nats.aero and also on Vimeo here.

“How do the benefits realised from Time Based Separation compare to the Capex and Opex costs?”

Dependent on the specifics for the airport but certainly for busier airports we would expect the investment to show a pay back in less than a year from the start of operations. The cost is much less than new ground infrastructure.

“What happens in cases of tailwind? Does the TBS system revert to distance separations?”

The system calculates the headwind component along the final approach in real time and applies the appropriate separation for the prevailing wind conditions. That means that in tailwind conditions the separation is slightly increased as under these conditions wake vortex risk is higher than in headwinds. This does not result in a loss of capacity versus light headwinds as the groundspeed is higher with a tailwind but our experience of a circa 30% reduction in the number of Wake encounter Reports since TBS went live has probably been helped by this feature of the tool.

“Is the delivered solution certified for any Safe Integrity Levels as per IEC 61508?”

“If the system aims to deliver an optimised arrival sequence based on wake turbulence category, how does the Arrivals Sector manage the delivery of aircraft in the optimised landing order for the TCU to process that may not necessarily be in the correct order leaving the holding stack?”

In the case of Heathrow, the coarse arrival sequence is developed by the Arrival Manager which gets data out to 550nm and metering horizon is at 350nm (read more about AMAN here). The aircraft are then metered through 4 holding stacks which are effectively corner posts from which ATC can select the next aircraft as we group them by wake category to maximise the runway capacity. This is generally in the sequence that the AMAN had developed but controllers fine tune this sequence when vectoring aircraft off the hold and to final approach and the Intelligent Approach tool has capture logic built into it which follows what the controller does and sets the final approach landing sequence based on the controller’ actions. This logic was built based on prototyping that we did with controllers and works very well allowing the tool to be implemented with minimum change to the controller task and no increase in workload but delivering maximum benefit.

“How can the Tower and Airport share information to optimize runway capacity?”

As touched on in the broadcast last week the solution to optimizing runway capacity, other than through expensive infrastructure changes, is through the use of supporting tools eg. Intelligent Approach but for these tools to be effective critical information must be openly shared between stakeholders. The need for an AODB which can be the repository for all required data and that can be accessed by all parties is key along with an ACDM program to utilise the data. Our tool is system agnostic and has been specifically designed to interface with current ATM platforms including A/DMAN through standard message sets and will deliver standard data to an end user for analysis and display.

“‘Optimizing’ Runway Capacity often uses deterministic models which crash when dealing with stochastic nature of an airport’s ability to deliver suitable aircraft sequences to the holding points. Should we try to take more cognisance of the complexities of airport pre-tactical departure planning when addressing Capacity AND resilience? “What if” and many other optimization aides are available today for pre departure sequencing and could contribute to a more holistic set of processes.”

Intelligent approach was deliberately designed to include logic that follows what the controller does and automatically generate its final approach landing sequence. It also interfaces to the arrival manager if there is one to determine the landing strategy for multiple runways and in a mixed mode environment the tool takes data from departure manager to determine the departure sequence. It does not therefore replace AMAN or DMAN but rather works with them, providing a much more consistent operational service delivery.

“Do you think that a second runway at Gatwick could help with Heathrow’s capacity issues?”

The issue is that new runways wherever they are built take a long time to get approved and built and in the mean-time the airports need to find a way to maintain operational resilience and cope with increasing passenger demand. The advantage of the Intelligent Approach solution is that it is not dependent on government decisions, does not change the flight path of the aircraft so does not require environmental consultation and it can be implemented quickly.

“Do you believe the circular runways could be a viable idea for future developments?”

It is an interesting concept which is covered in more detail in NATS Blog article.

The two biggest questions that will need to be addressed are

But this is a long term project with a likely lead time of decades, not months or years, and is one that we will continue to watch with interest.

“How does the system cope with situational awareness for incidents or events affecting the airport operations? (Example a/c AOG on the taxiway)”

As touched on in the broadcast, you can tell the system that you need a longer gap on approach to deal with an issue (e.g. give me a 10 mile gap for a runway inspection). The real benefit in disruption such as a closed runway is that for a multi runway airport the capacity will be higher on the remaining runways mitigating the effect and for a single runway airport, once the runway is cleared the capacity will be higher with Intelligent Approach allowing a faster recovery.

“With reference to the rise of Digital Towers and the use of Artificial Intelligence/Big Data, for more accurate prediction of individual aircraft landing times, isn’t it worth bringing forward TBS innovations to mixed-mode runway operations?”

The benefits for mixed mode runways are clear. Even for an airport like Gatwick which is already scheduled up to 55 movements per hour off a single runway, if we tailor time based approach separation to match the departure runway occupancy we are looking at 2 more movements per hour. For other airports the benefits could be even greater.

You may also be interested in a feature article about Intelligent Approach on our Discover Channel.

Mind the gap – a year of TBS operations

Andy is responsible for the delivery of NATS En Route Queue & Capacity Management Programme, which is a core part of the modernisation of UK airspace over the next five years. This includes the investments in Arrival Management and Sequencing, together with development of the world’s first use of ‘Pairwise’ final approach separation.

Andy is also NATS’ sponsor for Intelligent Approach commercial solutions, which include Time and Distance Based Separation tools.