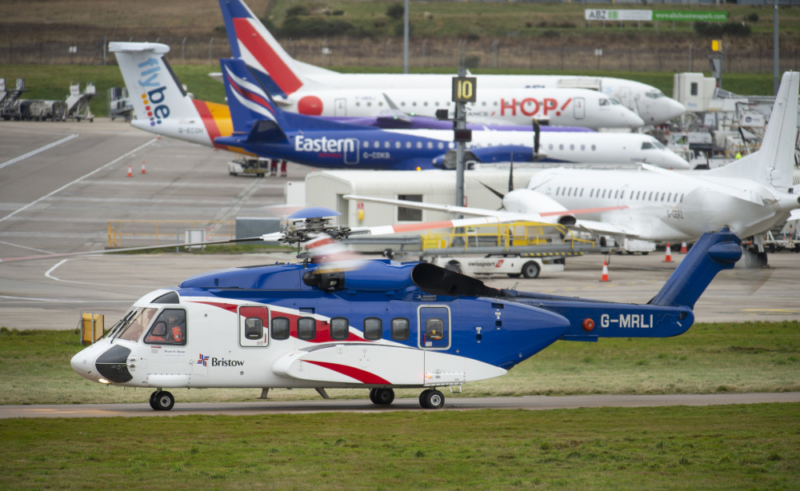 Realising the potential of ADS-B: Aberdeen and the North Sea oil rigs

If you’re looking to test the potential of a surveillance technology such as ADS-B in a live operation, the North Sea is the perfect place to do it.

Helicopter operations to and from oil rigs make up the majority of traffic handled over the North Sea lower airspace. It’s a busy operation, run out of Aberdeen Airport.

Back in 2010, we commissioned a WAM/ADS-B system, where surveillance sensors were deployed on oil rigs to provide cooperative surveillance in this busy part of the North Sea airspace.

With the recent increase in the number of helicopters equipped with ADS-B transponders (up to 90%), we decided to see how introducing ground-based ADS-B surveillance, as an addition to the WAM surveillance, could benefit our operations, safety, resilience and our customers.

Following a successful trial from August 2017, we got CAA approval in March 2019 to use ADS-B to provide a full radar service for helicopter operations in the North Sea. This is the first approval of its kind allowing the use of ADS-B to this level in the UK.

Transitioning from Operational Trial to full operational service was successful and since then we’ve extended our ADS-B coverage to the East Shetland Basin area – Brent sector, thus covering a bigger part of North Sea lower airspace.

Our customers and controllers continue to praise the benefits of ADS-B, which include increased coverage, accuracy and an improved update rate.

These benefits are very valuable in an area as remote as the North Sea, particularly in an emergency situation.

The ATC service provided is also more resilient, as ADS-B surveillance requires minimal sensors to maintain a surveillance service. This is a major benefit in remote areas, where access to the system sensors requires going to the oil rigs

Looking forward, the success of this application of ADS-B in the North Sea is an important milestone demonstrating the successful integration of ADS-B technology in our airspace. It gives us valuable evidence, experience and assurance that could help us as we implement more ADS-B services.

For instance, as well as the ongoing work towards introducing satellite-based ADS-B surveillance into Oceanic airspace, we are also assessing the benefits of the technology in controlled airspace and on airport surface surveillance applications.

For surface surveillance applications, ADS-B has the potential to enable us to track aircraft on the ground all the way to and from the stand/gate, beyond the range of conventional surface surveillance. This leads to improved situational awareness for the ATC tower operations, and also for users of A-CDM applications such as airport operators and airlines.

The potential future uses where we believe ADS-B could have a benefit or role to play are plenty, such as in the safe integration of commercial drones, Digital Tower applications and in lowering airspace infringement events. With ADS-B transponders recently becoming more widespread amongst the GA community, the potential to reduce infringements is substantial.

Our proactive approach to ADS-B is important, especially with the European mandate that comes into force in 2020 for airlines to equip their fleets (in certain classes) with ADS-B avionics.

By integrating ADS-B and getting approval to use it for an ATC service we are being a proactive service provider, realising benefits of new avionics by our airspace users.

Overall, the introduction of ADS-B into full operational service has been a great team effort including the ATC and Engineering teams at Aberdeen Airport, with support from the CAA regulator.

2016 – The team notices a significant increase in the volume of helicopters equipped with ADS-B transponders and runs engineering assessments and validation with good results.

2017 – The team recommends using ADS-B operationally, beginning a trial in August 2017 where ADS-B is used as the sole means of surveillance for the majority of helicopter operations in a large part of our lower North Sea airspace.

2019 – The operational trial is declared successful in March and we win CAA approval to use ADS-B to provide a radar service across our North Sea airspace.

Congratulations to NATS, and welcome to the ADS-B world!
Avinor ANS/Norway introduced ADS-B for surveillance of offshore helicopters over the Norwegian Continental Shelf in 2013, and has established ADS-B based Controlled Airspace (CTA) from 1500FT to FL085 (5NM separation) over The Norwegian part of the North Sea, and in addition in the Norwegian Sea in the north, with great success!
Avinor ANS has the identical ADS-B system as NATS (SAAB Sensis), and its a very reliable ADS-B system.

Welcome to the world of ADS-B, NATS! Avinor ANS/Norway established Controlled Airspace based on ADS-B over the Norwegian Continental Shelf for offshore helicopters in 2013. We do have the same ADS-B system as NATS, it is very reliable. ADS-B is the future of surveillance!

Khalid joined NATS as graduate in 2001 and worked in various areas within the organization. Previously Khalid was head of the Surveillance Section within NATS NSL and a Senior Air Traffic Control Engineer, responsible for various approach and airport surveillance systems. He managed the delivery of various ground and approach surveillance systems within NATS, including the North Sea and Edinburgh WAM systems, the first such systems certified for operational use within the UK airspace.

Khalid holds a BEng Hons degree from Bath University and an MSc degree in Telecommunications from Essex. He is a Chartered Engineer and has publications in the fields of WAM surveillance and validation.