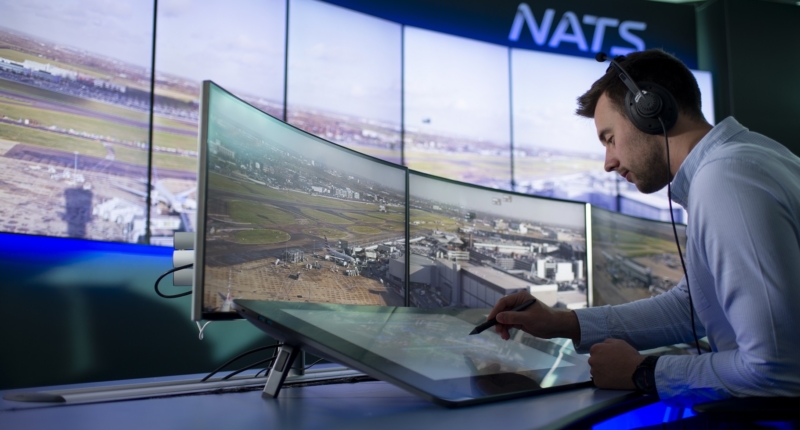 Earlier this year we started a project looking at whether we could apply a combination of Artificial Intelligence (AI) and ultra-HD camera technology to help cut airport weather- related delays.

We installed 18 Ultra-HD (UHD) 4K, cameras on the tower at Heathrow and additional UHD cameras at exit points on the airport’s northern runway. The images from those cameras were then fed live into AIMEE – Searidge Technology’s AI platform.

AIMEE has the ability to identify when an aircraft has safely left a runway and to then provide key operational triggers to air traffic controllers as a result. Our intent has been to prove that when a tower like Heathrow’s disappear into low cloud – known as ‘VIS 2 conditions’ – AIMEE could then inform the controllers when the runway was clear for the next arrival, something that would recoup the landing capacity that’s lost in these conditions.

Not only would this reduce delays for the airlines and their passengers, it would also ensure safety is maintained and reduce the monitoring workload on the controllers, something that frees them up to make other key decisions.

This is a radically different application of digital tower technology compared to what’s been done around the world to date, where usually a camera mast is used to replace a traditional control tower. That’s an application that suits some airports, but in the Laboratory facility we’ve built inside Heathrow tower, we’re keen to explore ideas that have a broader operational benefit, just like the current ‘tower in cloud’ project.

Of course, introducing any kind of innovation like this in a safety critical industry requires significant amounts of research and testing. Since January, AIMEE has continually monitored arrivals, on Runway 27R/09L, and we’ve now completed our first analysis of over 40,000 arrivals. The results from this analysis are really exciting with AIMEE performing extremely well, which includes identifying aircraft in poor weather conditions and in darkness, when the 4K cameras we’re using have been proven to perform better than the human eye.

We’re now planning to extend the trial to include the winter months. Not only will this allow us to capture even more varied weather conditions, it will also give us the chance to refine the model and test whether the solution works in full CAT II/III low visibility conditions. If it does, it will prove an enormous benefit given the impact Low Visibility Procedures (LVPs) have on operations at airports around the world, further strengthening the business case for full deployment.

Low Visibility Procedures are necessary due to fog, low cloud or heavy rain – things we get quite a lot of in the UK – and mean the whole operation has to slow down as pilots and controllers rely entirely on their instruments and tools. The potential that AIMEE could act as a controller’s eyes in all of these constraining conditions and allow for anything even close to normal operations is massively exciting. We’ll be testing the theory over the coming months before submitting a safety case to the Civil Aviation Authority next year.

The first control tower was built in the UK in 1920, helping to set the template for what a tower should be. Now, almost a century later we might be glimpsing a future that re-writes that template and that’s incredibly exciting.