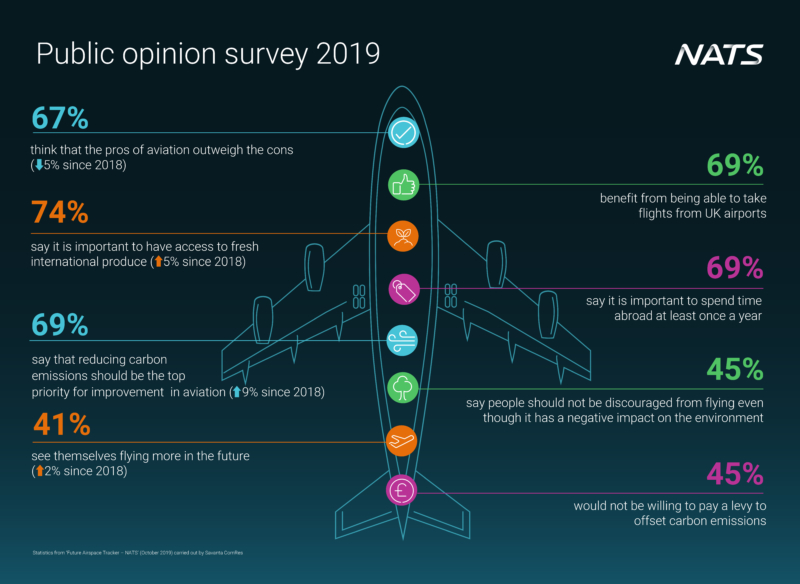 Importance of aviation to UK public on the rise

NATS has an annual social research programme which includes asking the public, MPs and businesses for their views on a broad range of aviation issues. Our most recent public opinion tracking survey, run with Savanta ComRes (a leading research consultancy), provided us with a strong indication on the things that matter most to people around the country.

Most people view aviation as important to the UK economy and their own lives. They like the ease of getting on a plane to take a foreign trip, being able to buy goods from overseas that are delivered quickly and appreciate that fresh international produce in supermarkets to a large degree relies on aviation. But they are also increasingly concerned about the environmental impacts of aviation and think the industry should do more to tackle this.

Two thirds of people (67%) believe the benefits of aviation outweigh the disbenefits although this is down from 72% in 2018. This might be because of the increased public profile around climate change; for example, there is a 9% increase (60% 2018 vs. 69% 2019) in people choosing a reduction in carbon emissions as their top priority for improvement in aviation.

This year there has been a slight increase of 2% (to 41% in 2019) in the number of British adults who see themselves flying more in the future, mirrored by the importance people are placing on flying – either to spend time abroad (up 2%, from 67% to 69%) or ensuring that they have access to fresh international produce (up 5%, from 69% to 74%). Young adults (18-34) are more likely than other age groups to say that aviation related benefits are important to them and they are also more likely to say that people should not be discouraged from flying.

The public in our survey feel this is mainly a challenge for the industry to tackle, with only 37% saying they are willing to pay to offset the carbon footprint for their flight. This is down 13% from last year, indicating that despite increased environmental concern a greater proportion this year are not willing to pay a charge.

NATS has been improving the environmental performance of our operation for several years, working closely with the wider aviation industry to ensure optimal airspace performance whilst creating more efficient routes. Three-quarters (74%) of the public feel that more efficient routes that save fuel and reduce environmental impact should be a priority for any airspace modernisation. Consistent with rising environmental concern, as a priority this has increased 6% from last year’s survey (68%).

We are now working on a wholesale modernisation of our airspace to enable quicker, quieter and cleaner flights thereby realising much greater environmental benefits. This is a huge undertaking by the aviation industry however, only 15% of people have heard anything about the planned changes and the work already completed to date.

The research provides a clear indication that the industry needs to more effectively communicate airspace modernisation plans, explaining that the very improvements the UK public want to see are already in motion. We have a shared agenda regarding this issue.  We’ll be talking a lot more about what it will mean for you and how it will improve the positive impacts that flying brings, personally and as a nation. Whether it is holidays, time-critical medical supplies or perishable foods grown for our tables by faraway countries, the UK relies on aviation to keep things moving and keep us connected.

Robin joined NATS in 2016 and leads on our engagement with local communities and community groups. He represents NATS on several airport and government forums which involve community representation, particularly on noise and other environment related matters. He has also been responsible for setting up social research projects and surveys to track opinion among various stakeholder groups.

Prior to joining NATS Robin worked for a number of social research agencies. Most recently he was part of the government’s Sciencewise programme managing public engagement projects to help policy makers develop socially informed policy in the areas of science and technology.

Adapting to change: Our digital approach to airspace consultation