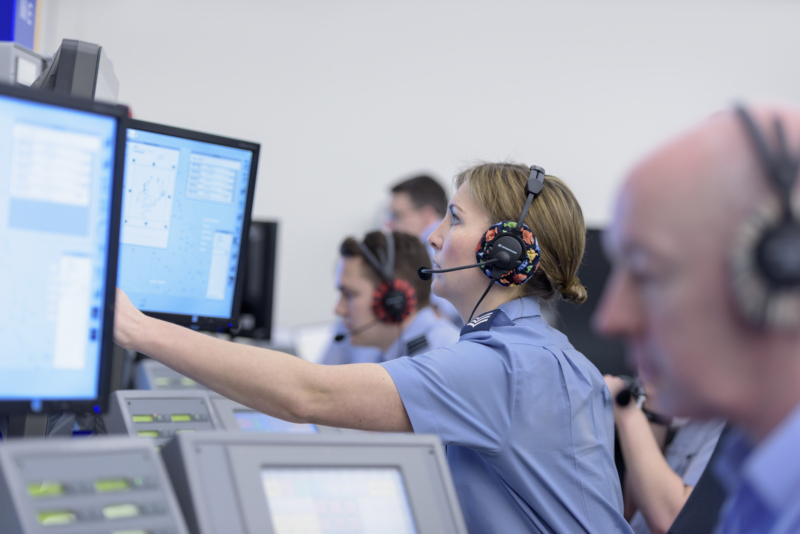 You might occasionally see news reports on airborne security events. The response is always managed by the Military, but NATS still has a role to play.

When a pilot informs the air traffic controller of the perceived threat, they may request to land as soon as possible.

Our air traffic controllers immediately pass that message on to their military counterparts, who sit beside them in the operations room. This also applies when we are unable to make contact with an aircraft.

The Military will conduct threat assessments and determine whether or not to dispatch a military escort, something that may result in a sonic boom with the Typhoons accelerating through the sound barrier to intercept as quickly as possible.

The UK is one of the few countries around the world with a joint and integrated civil and military air traffic control service, with NATS and RAF controllers working side-by-side.

This close relationship allows greater cooperation and more flexible use of airspace.

If an aircraft needs to divert to an alternative airport the controller teams will work closely to facilitate landing at the designated airport.

While the aircraft makes its way to the designated airport, all flights at the airport are temporarily grounded and NATS’ focus moves to ensuring a vertical and lateral buffer around the aircraft to get it there safely and without disruption.

As well as clearing the airspace, we also work with neighbouring airports to limit the number of landings and departures. This can potentially cause problems on the ground and delays throughout the network, but everyone recognises that security concerns are paramount.

Meanwhile, controllers working in the air traffic control tower at the designated airport are preparing the runway for the aircraft’s arrival. It’s especially important that the runway is available and the emergency services are ready and waiting at the scene.

Thankfully, on most occasions everything turns out to be OK, but that might not always be the case and, in order to ensure we’re always prepared, our controllers undergo yearly TRUCE (Training for Unusual Circumstances and Emergencies) sessions to practice dealing with a variety of scenarios.

We invite pilots to take part in scenario training to understand how our actions affect each other.

Flying is one of the safest forms of transport and emergencies like this are rare; if situations do occur, pilots and air traffic controllers have the skills and training to handle them.

Such a nice read. Always found this ATC very interesting

Good to know.Thanks for posting.