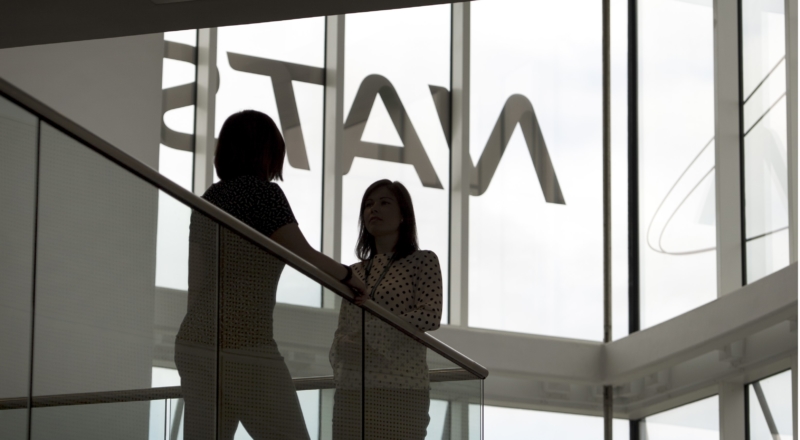 With Mother’s Day around the corner and given the fact we could all do with some cheer right now, we thought it would be fun to chat to some of the mums at NATS who have, in turn, inspired their children to join us.

When she was 18 years old, Carolyn spent a morning in Heathrow tower and from that moment on she was hooked. She’d always had an interest in aviation as her father was a commercial airline pilot, so was keen to follow in his footsteps.

Knowing that she eventually wanted a family, Carolyn began her search for an aviation related career that would allow her to be at home more regularly, and so the idea of becoming an air traffic control was born.

Carolyn spent over 20 years working as an air traffic controller at our Swanwick control centre, looking after some of the busiest sectors of airspace over London, before joining the Swanwick Training team as a Training Specialist. Now, Carolyn’s role involves developing and delivering training activities for controllers.

Tomos, her son, has recently joined Swanwick as a trainee air traffic controller after not doing as well as he wanted to at university. He said: “I’ve always known about NATS because my Mum has worked there for my whole life and I’ve seen how much she has loved her job, so I thought, ‘why not?’”

Because Carolyn is still qualified to control live traffic, the pair often bump into each other in the operations room, where Tomos is now completing his ‘on the job’ training ahead of validation. Carolyn said: “I have got used to seeing Tomos at work but I cannot get used to him answering when I phone his sectors to coordinate traffic!”

Having an understanding of what each other do for a living has brought Tomos and Carolyn closer together, but it has also come with one drawback too: ““Part of mum’s job is to monitor all of the trainees’ progress to make sure we’re getting on OK and that adds a bit of pressure. If I ever have a bad day at work or make a mistake my mum is going to read about it!”

But there must be some perks to working together? Aside from being able to talk about the job to someone who really understands it, Tomos says: “Occasionally mum will buy me a tea when we are in at the same time so that is always a nice perk, and every now and again if she brings in some cake she’ll let me know so I can drop into the office and steal a slice!”

Many young people don’t consider air traffic control as a career option because they simply don’t know it exists. “I’m not sure that I would have known about NATS without my mum. I wouldn’t say that I joined because she works there, but it definitely opened my eyes to the job” said Tomos.

Carolyn said: “I never imagined Tomos working for NATS, but I am immensely proud.”

Hannah and her mum, Jane, both work at our control centre in Prestwick, Ayrshire. Hannah is an Air Traffic Services Assistant, while Jane is an Operational Resource Specialist.

Jane was already working in the aviation industry but looking for a change of career when she heard about a vacancy at NATS from a family member and ran straight to the Job Centre to apply.

In her day-to-day role, Jane is part of a team responsible for the rostering of all operational staff in the centre – including all the air traffic controllers. Thanks to the varying shifts and sector validations, staff rosters are a complex art at NATS.

She said: “Hannah has always known of NATS as she spent lots of her childhood coming along to family open days and various events organised within the company. She also visited for her work experience while at school and got her first real view of what it would be like to work here.”

When Jane found out there was a temporary job going at NATS, she was keen to let her daughter know – and thankfully it came at the perfect time. Hannah said: “I had recently dropped out of a journalism degree at university and wasn’t sure what I wanted to do, so initially saw it as a job to tide me over. I never imagined I’d find myself in my current position but wouldn’t change a thing!”

Hannah’s role as ATC Assistant is an integral part of the running of the operations room. She said: “I am there to help the controllers with anything from adjusting flight plans and passing inbound traffic estimates to airfields, through to activating plans to diversions.”

Air traffic control, complete with its glossary of over 500 acronyms, isn’t the easiest business to get your head around. Luckily for Hannah, Jane was the perfect sounding board when she first joined us: “My mum and I working for the same company has certainly had its advantages.”

“She proved herself worthy of answering all my stupid questions in the beginning and now for even more!” Hannah said, as she’s recently started training for an exciting secondment in Safety Performance and Investigations.

But are there any disadvantages to working together? “One would be my mum knowing my every move,” said Hannah, “When I pick up any overtime, I’m guaranteed a call to remind me that the bump in my car still needs fixing…!”

Not surprisingly, Jane doesn’t see that as such a negative: “There’s no hiding!” she joked.

“It’s nice to see Hannah at work too as she has recently moved out of the family home. We sometimes get to car share, which is the perfect time to catch up with one another on what has been happening both in and out of work.”

One thing that both our mums and children have in common is a recognition of the importance of role models.

Hannah said: “I believe having positive female role models in this industry is absolutely paramount. It’s no secret that the aviation industry is still male dominated, so it’s importance of highlight the role of women right across NATS.”

Wishing all the mums at NATS and beyond a Happy Mother’s Day.

Correct me if I’m wrong, but I don’t think that Swannick has been operational for more than 19 years!