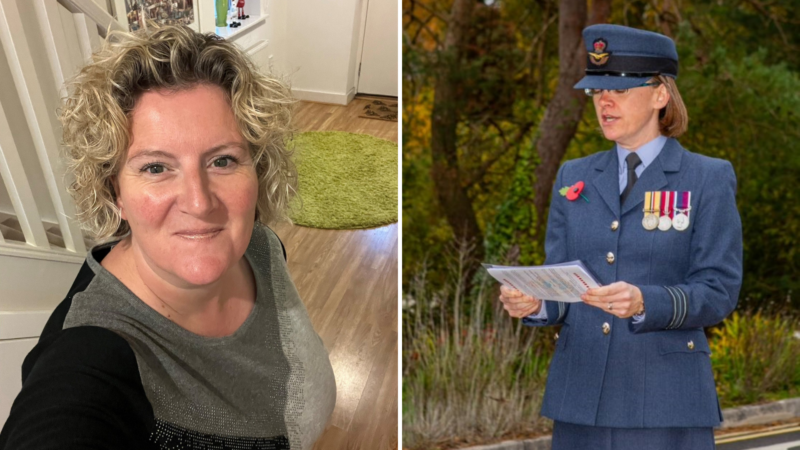 Women in Aviation: From Manchester tower and 78 Squadron

In celebration of Women of Aviation Week, Women’s History Month and International Women’s Day, we’ve been speaking to some of the fantastic women who work at NATS and finding out exactly how and why they ended up working in the wonderful world of aviation.

What was your dream job when you were younger?

Nicky: I never really had a dream career that I was fixed on when I was younger, I wanted to be an accountant at one point and a National Hunt Jockey so I could ride in the Grand National… funny how things turn out!

Lorraine: I really wanted to be a teacher, specifically a PE Teacher, however, a short stint on work experience at a secondary school soon changed my direction of travel!

How did you find yourself working within aviation?

Nicky: I was on a trip to South Africa in 1997. My Dad was cabin crew on the British Airways flight we were on, so the captain invited me on to the flight deck for take-off out of Johannesburg. I remember being given a headset so I could hear the conversation with Air Traffic Control, there were thunderstorms all around and a fascinating discussion about the best way for us to avoid it climbing out. By the time I got off the flight I knew that was the job I wanted to do.

Lorraine: I joined the RAF after taking a year out following University. I applied to be a Physical Training Instructor as my academic qualifications were in this field however, I was deemed to not meet the criteria for the rigours of parachute jumping and adventurous training and had (apparently) shown clear aptitude for Air Traffic Control.

Nicky: During my training, I gained experience working at Belfast Aldergrove, Bournemouth and Gatwick airports. My first validation was at Birmingham Airport in 2000 and I stayed here for eight years. It was a brilliant unit to start my career at with a diverse mix of traffic plus a great team! It was perfect for learning and honing my skills enabled me to go on to train other controllers.

In 2008 I decided I was ready for a new challenge, so I took the opportunity to apply for a promotion from Birmingham to Manchester Airport which is busier and more complex. I’ve been here ever since and love the fact no two shifts are the same and the challenges are constantly changing.

Nicky in the Manchester tower

Lorraine: I have served at several RAF Stations (Northolt, West Drayton, HQ Air, Leeming, Valley and Swanwick) and have experience in both the Terminal and Area Control environments. I completed a busy tour at RAF Valley before returning to be an Executive Officer within 78 Squadron.

Why do you enjoy working in aviation?

Nicky: I have always loved the buzz of airports and picked up the travelling bug from a young age with my Dad working for BA. I love being part of the airport machinery, there are so many different roles that all play a vital part in getting aircraft to and from their destinations and I find it fascinating. Working in the Control Tower, you can see so many other roles at work and feel part of a much bigger team.

Lorraine: There is such a huge variety to the work we undertake and there are new challenges every day. The RAF offers various opportunities for personal development through higher education courses, sports and adventurous training. The operational tempo really affects the output we deliver, and we are often directly involved in key national events. On a personal level, I am really proud to have been involved in the planning and execution of some major events for the RAF including playing a part in the RAF 100 fly past.

Do you have any advice for women wanting to pursue a career within aviation?

Nicky: Follow your goals or dreams; don’t think about anyone else and what they are doing. In my experience you are judged on your skill and competency as a controller regardless of your gender, race or religion.

Lorraine: Don’t let anything hold you back. What we need to remember is aviation is not just about aeroplanes, it is a diverse field to explore. There are aviation related opportunities in airspace management, airspace engineering and air traffic management systems and remotely piloted aerial vehicles/air systems is a real emerging area. All these areas need diversity to be successful.

Tell us about a woman who inspired you and why

Nicky: I am a member of Girlguiding UK and run my own unit of Ranger Guides as well as being a Division Commissioner so someone who inspires me is Agnes Baden-Powell. She wanted something for girls to run alongside Scouting and so, in 1910 the Girl Guides was born. It offers girls opportunities for fun and friendship and enables them to thrive and grow into confident young women. Without Agnes and her passion for getting girls the same opportunities that the boys were having, Girlguiding wouldn’t exist.

Lorraine: There are many women I am inspired by. Whilst deployed to the Falkland Islands in 2005, I was following Dame Ellen McArthur as she circumnavigated the globe and recently an RAF Veteran, Emma Wolstenholme attempted to row solo across the Atlantic thwarted only by a technical failure of her navigation equipment. Day to day, I am surrounded by colleagues, both military and civilian, who manage their professional careers whilst supporting growing families, single parents, and those who have overcome adversity to be where they are today. You often don’t need to look too far to seek inspiration – even on the smallest of scales.

Very interesting and inspiring. Well done ladies and thank you