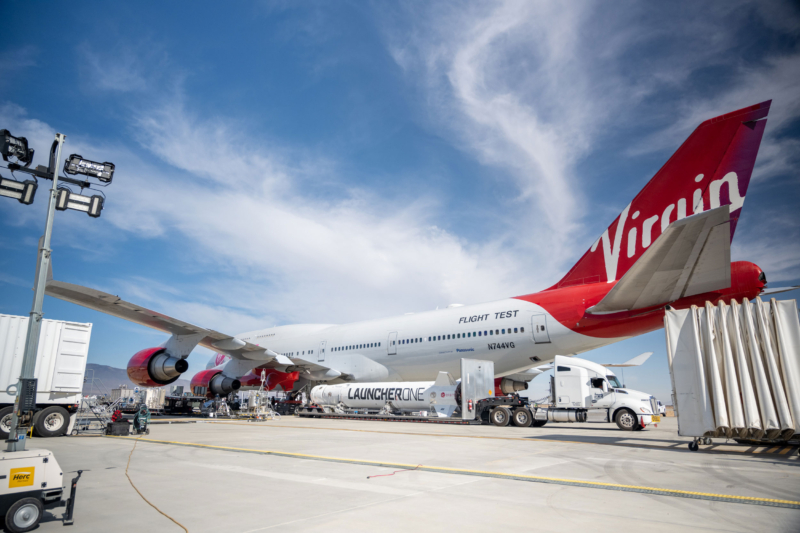 As we’ve all been avidly following in the news, Virgin Orbit has just attempted the first orbital space launch from the UK, an important milestone for the country’s space industry, despite the anomaly that occurred after the rocket had left the Earth’s atmosphere. While public attention has largely been on the development of the rocket and its payload, we have been working hard in the background for over a year, along with partners across multiple countries, to ensure that the necessary airspace was clear for the launch.

Cosmic Girl, the modified Boeing 747, departed the new Spaceport Cornwall at Newquay Airport, heading for the launch site to the south of Ireland. As a ‘horizontal launch’ operator, Virgin Orbit are not limited to any specific launch location and for this mission, named “Start Me Up” after the Rolling Stones song, the preferred location was off the Irish coast, with the LauncherOne rocket heading roughly south towards Madeira and the Canary Islands.

With Cosmic Girl departing from a UK runway then entering Irish airspace, and the rocket trajectory predicted to enter or pass over airspace managed by the UK, Portugal and Spain, a multi-national approach to the launch was key, with Air Navigation Service Providers (ANSPs), National Aviation Regulators, Transport Ministries, and Defence Ministries from the four countries all involved.

We first met with Spaceport Cornwall to discuss this launch in September 2019, at the UK Space Conference. Since then, we have assessed multiple different launch locations and trajectories and provided feedback to Virgin Orbit and the CAA on their viability and impact on other airspace users.

Once the final launch location was determined, we helped to enable the Letter of Agreement between all of the ANSPs, 78 Squadron (military controllers who controlled the aircraft from our Swanwick Centre), regulators, Virgin Orbit, Eurocontrol and the UK MoD, using our years of experience in air traffic management to help share understanding on how the launch would work. This then provided the information needed for the procedures that operational controllers at our Swanwick and Prestwick centres needed to safely manage the launch, and any contingencies, such as diversions.

Ensuring other airspace users were aware of the launch and the potential hazard, involved defining a series of Temporary Danger Areas (TDAs) covering over 800 nautical miles. These TDAs provided space for Cosmic Girl to manoeuvre and position to achieve a specific time and place to launch its rocket into space, the first stage and fairings to return safely to earth, and also to keep the area underneath the rocket’s flight path clear to protect other aviators just in case LauncherOne had an in-flight failure.

As the time of the launch neared, the UK Airspace Management Cell, Oceanic Operations at Prestwick, the Irish, Portuguese and Spanish ANSPs all prepared to activate the TDAs and advise any aircraft in the area to leave. The activation of the TDAs had already been broadcast using a series of NOTAMs; and EUROCONTROL’s Network Management forward planning functions, combined with NATS working with other ANSP operational teams, ensured that aircraft maintained a safe distance from the launch trajectory. The time of day was also a key consideration in order to cause the least amount of disruption to the least number of flights.

As the first attempted orbital space launch from the continent of Europe, the Start Me Up mission has demonstrated the level of multi-national coordination which will be needed for future launches given the complexity and traffic density of European airspace. The aim throughout this launch was to use standard airspace structures (TDAs) and working practices to keep Cosmic Girl, LauncherOne, and the normal airline traffic away from each other so that all parties could conduct their business without interfering with (or being interfered by) anyone else.  Whilst the mission was not successful, we are proud to have played our part and help demonstrate just what is possible, as well as developing the experience that is vital for future launches.

Very interesting post, thanks Patrick. The amount of work that went into making the launch safe to other aviation users really comes across. Please can you say a few words on the next steps for scaling up the process for more regular launches in the future?

Patrick has over 30 years of experience working for NATS, with roles in Analytics, R&D, International Affairs, Strategy, Regulator Relations, and now Space Launch.