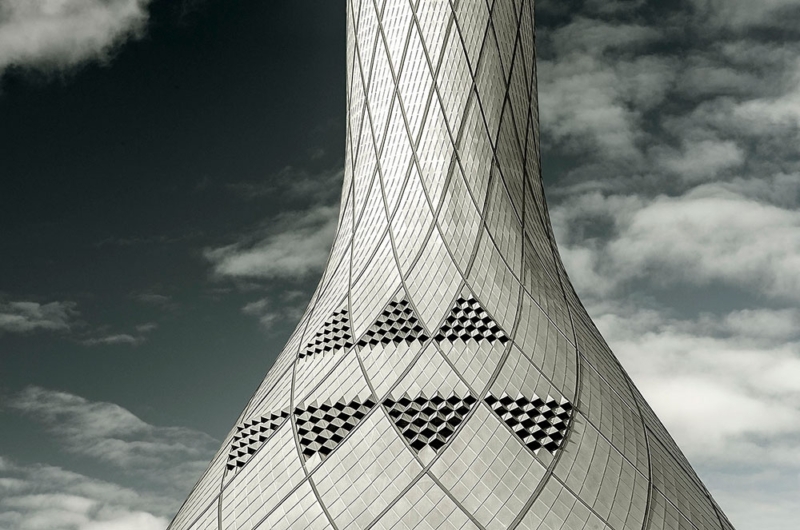 Art of the Airport Tower

Those among you who are already thinking of the perfect Christmas gift for the aviation geek in your life could do no better than Art of the Airport Tower – a book full of striking and beautiful photography capturing some of the world’s most iconic and interesting towers.

Smithsonian photographer Carolyn Russo traveled to 23 countries and photographed 85 historic and contemporary control towers to explore their varied forms and functions – from Vancouver to Vienna via Jakarta and Joensuu.

Carolyn first contacted NATS back in 2012 and we were happy to help her access some of the UK towers that feature in the book – Heathrow, Farnborough, Edinburgh and Aberdeen. Now, with the book published and an exhibition currently running at the Smithsonian’s National Air and Space Museum in Washington DC, it was great to catch up with her on how the project had gone.

What do you find fascinating about the towers and how did you attempt to photograph them?

Airport towers have a powerful presence—watching over the vastness of the airport and sky; a nonjudgmental cultural greeter; a choreographer or conductor of the aircraft dance; a mother bird caring for her flock; and an omniscient, intelligent structure keeping humans safe. I saw them as the unsung heroes of the airport landscape and tried to elevate them beyond their height and amazing architecture. I wanted so much more out of them. I looked for the individual traits in each tower as I do when making a portrait. Sometimes, the tower became something else through the abstracted image. For the older historical towers, I took an objective approach and documented them as eye-witnesses to history. I feel historical towers hold many stories and secrets to the early days of aviation, and should be preserved when possible.

When and why did you start photographing airport towers?

I had began thinking about photographing towers in 2006 towards the end of a former book project In Plane View: Abstractions of Flight. At that time I was seeing and photographing aircraft as abstractions. On a trip to New York through LaGuardia airport to visit my family, the airport tower came into view outside of my airplane window and close-up, the tower looked like Swiss cheese! From there I wanted to explore the different forms of airport towers and my view was a natural transition into this project.

What is your favorite tower?

That’s a tough one. The towers are kind of like children with all of their unique traits. So I try not to choose favorites, but ones that were on my wish list for their bold and modern architecture were the towers at the Edinburgh Airport and also the Dubai and Abu Dhabi International Airports in the United Arab Emirates. I was also drawn to the quietness of the historical East Fortune tower used in WWII that stands in the middle of a Scottish wheat field. What makes that photograph is a farmer’s tractor parked underneath as if in a garage. The tower is abandoned but still purposeful – to the farmer.

You traveled to many places. Talk about any stand out travel experiences?

I traveled alone to twenty-two countries outside of the United States, and each visit offered new and interesting experiences. I wanted to photograph the Torslanda tower in Sweden (a 1960s non-operational tower in the shape of a space capsule that sits at the top of the hill) and it would have been difficult for me to reach it without a car. In fact, I didn’t know where it was located, just the name of the town. My research volunteer e-mailed a former employee of the now-closed airport and long story short, I received an offer for a ride to the tower the next day. The tower photography session turned into a reunion party with former air traffic controllers and the local newspaper. We had a lunch afterwards with photo albums passed around and conversations about the former glory days of the tower. At another airport, the air traffic controllers thought I could be a spy. But that’s another story!

Have you got a favourite tower? Are you mad for Manchester or in love with Luton? Leave a comment and tell us why, with the best reason winning a copy of Carolyn’s book.

Art of the Airport Tower is available wherever books are sold.

Airport Tower at New Delhi, India, 102-metre tower is my favourite.
Because its twice taller than the old tower which is at same place, and it’s more taller than the famous local historical monument Qutb Minar which is just 74 meters.

Macau International (I can provide a photo if needed); because I was part of the commissioning team for all the tower systems there back in 1995. We had to start the installation and commissioning works before the lift company had installed and commissioned their works; running up and down 200+ stairs carrying installation items and test equipment in high temperatures and humidities was certainly one way of keeping fit. When we started the tower was still encased in bamboo scaffolding which swayed in the breeze. Of many lasting memories was the commissioning of the diverse microwave shots that took the radar and ground to air comms from the tower over to the adjoining island of Coloane which due to time constraints we had to point during torrential rain and a lightning storm! My 9 months on site in Macau was great fun and a huge learning experience for me.

I worked at London Heathrow from 2002 – 2010 and everyday I watched the new tower taking shape whilst it was being built near to terminal 4/ Royal suite. The move from its build position to its final location was fascinating. Therefore Heathrow has to be my favourite.

It has to be Suvarnabhumi, as landing there, my son wanted to see the then tallest control tower in the world and we didn’t see it!!!
It is only on our way back to the airport that we finally saw it and it is a nice a clean looking metal tube.

I love all unused second world RAF towers as my youth was spent living in RAF bases. A particular favourite was RAF Hemswell because there were rumours of ghosts of Guy Gibson and his dog. All the buildings in the disused RAF camp were named after Dambuster pilots. I learned the Dambusters were based at RAF Scampton a few miles down the road but the film used Hemswell as Scampton. I didn’t care I was only 10 at the time and the idea of ghosts in a disused tower was quite exciting.

My favorite has to be the tower at Sydney. I love its unique shape and characteristics. I would love to see a tower of that shape in the UK!

My favorite tower has to be at Logan International Airport in Boston. It is very unique as it looks nothing like a control tower! I love its shape and architecture.I think the tower is probably the pride of the airport as it is really fascinating. The tower is nearly a dozen stories high and is considered as a local landmark!!

Hi everyone, thank you all for sharing your stories mutual love for the airport tower. After careful consideration we’ve decided we couldn’t pick just one winner so are going to offer two copies of Carolyn’s book. The first goes to David Wood for his fantastic account of working in Macau and the second to Samaa because Sydney really is a tower with a unique sense of style. Congratulations to you both and we’ll be in touch to arrange getting copies sent to you.