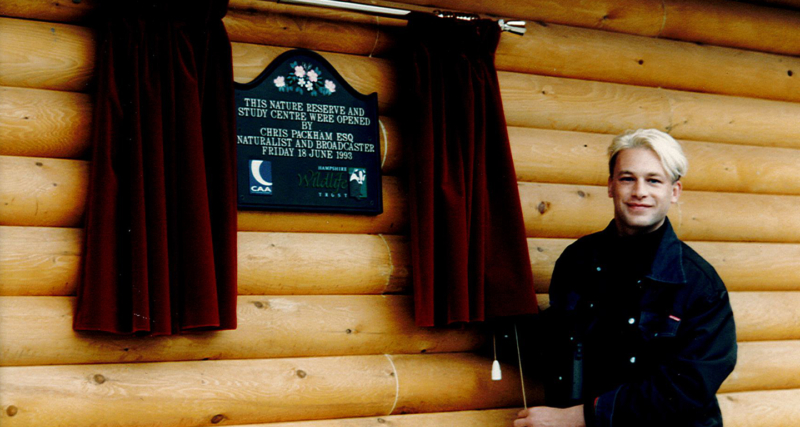 This month, we celebrate the 25th anniversary of the Swanwick Lakes partnership between NATS and Hampshire & Isle of Wight Wildlife Trust.

The nature reserve, tucked away next to our Swanwick control centre, holds scenic lakes, woods and grassland created from abandoned clay workings. There are over two miles of paths around the lakes and woods with over one mile of surfaced marked trails. It provides a valuable space for people to relax and learn about wildlife.

Many people across our business have fond memories of visiting the nature reserve and one colleague even had a hand in helping develop it. I asked them more about their experiences…

Ashley Warner, EMCOR Electrical Technician based at Swanwick remembers going there before the nature reserve opened.

“I used to visit the site in my youth before it was built in the ‘70s and very early ‘80s. I would visit the lakes for fossil hunting and walking the conveyor belt tracks that used to take the clay from the pits to the kilns. The site was less overgrown than today as it was closed around 1974, so it took some time for nature to take over.

“In the early ‘70s there used to be an old woman who lived in one of the old railway carriages on the edge of the site on the back northern part on Green Lane, she used to sit outside with her campfire cooking.”
Security Manager, Brian Bevis, has been involved with the reserve across the years:

“I have assisted with a great many things, from installing an intruder alarm, to assisting with fire alarm maintenance and the building upkeep. We also provided access to the Swanwick woodland so the wildlife population counts could take place.

“My eldest son has attended the reserve a number of times with the local Beaver group, the visits always seem to go down very well with all the kids.

“It’s a beautiful and tranquil open space that is right on our doorstep, it is an ideal location to go for a walk and clear your head at lunchtime. With staff wellbeing and a good work life balance becoming more and more important, it is great to have the nature reserve so close.”

Sean Allen, Head of Facilities Management and General Manager for NATS Whiteley was part of the civil engineering team that developed the site, including all the woodland paths that link the nature reserve cabin to the remote lakes. Sean remembers some interesting challenges during the construction:

“The lake at the nature centre was called ‘Blue Lake’, due to the colour the London Clay imparted into the water. It was c30-40ft deep, with sheer sides, therefore there was very little plant or wildlife present. We were tasked with draining and re-profiling the lake to various depths to encourage and support a wide variety of plant and wildlife. The lake was fed by natural springs, so we needed to locate and install a filter route to allow the lake to re-fill naturally. Once full the lake was allowed to regenerate naturally.

“During construction we found a World War II mortar shell, which was live and had to be disabled by a controlled explosion carried out by the Army Unexploded Ordnance team.

“Someone later released three terrapins into the lake – a couple of years later (when they’d grown to the size of dinner plates) we had to create a trap to capture them as they were starting to take baby ducklings!

“White Witches also turned up on site during construction requesting access to ancient ‘blood pits’ – part of the ancient woodlands contained within the sites security perimeter!

“The security fence has a number of badger flaps and there’s a tunnel under Sopwith Way to allow the incumbent badger families to traverse the site over their preferred routes. They’ve since gone.”

The reserve really is a wonderful place to take a stroll in, a real hidden oasis that’s open to the public with regular events all year round. Find out more on the website and hopefully we’ll be celebrating another 25 years!

I came across this lovely blog post as I was searching for a solution to the huge terrapins we have at Fort Brockhurst in Gosport that keep destroying swans nests, I would be very grateful if Sean could contact me about the traps that were used at Swanwick to remove/rehouse the terrapins to somewhere they will not damage native wildlife. Thank you

Jo joined NATS in 1997 as a scientist and has enjoyed several different technical and leadership roles within the business as her career progressed.
As Engagement Manager for Facilities Management, Jo works with a team of facilities professionals and key stakeholders across the business to ensure our facilities are fit for purpose both today and in the future.

Many thanks for these incredibly heart moving accounts: ".....but as the afternoon went on it actually started to become eerily quiet...." the same we shared here in Madrid after the train bombing.

Interesting article as I spent quite some time as an examiner (Validity and Competence) both in NATS and CAA SRG, as it was before becoming SARG. A major concern in my experience deterioration or 'slipping' of competence that passed …

By Bert Hayes on ‘Changing the way we monitor controller competence’

How does it work in practice as there are many levels of capacity and many weather related mitigation’s? No jargon replies please

By Peter pennie on ‘Changing the way we monitor controller competence’