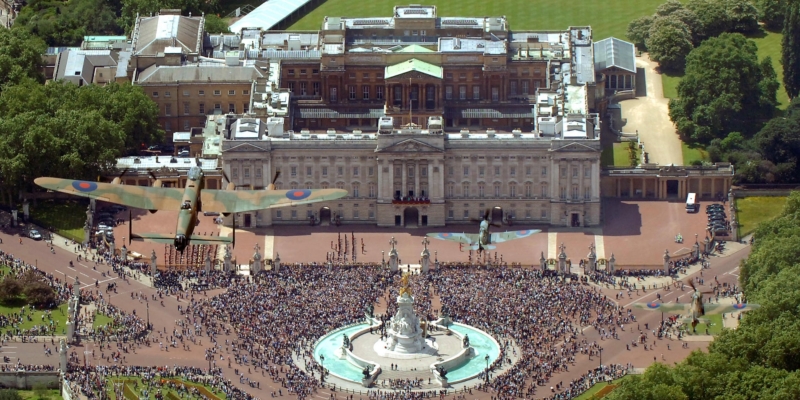 How do you squeeze a flying armada of one hundred aircraft of various vintages in and out of the world’s most complex piece of airspace?

That was the question we were posed last year when the RAF asked us work with them on their 100th anniversary flypast – one of the biggest ever attempted in the UK.

On 10 July 100 individual aircraft – from Spitfires and Lancasters to the new F-35 Lightning, will gather over the North Sea before flying south and east towards central London. The aircraft will then over fly Buckingham Palace at 13.00 at 1,400ft before continuing west and dispersing into the wider airspace.

Both London City and Heathrow airports will see air traffic movements paused for short periods of around 20 mins, and around a third of the total aircraft will fly directly over Heathrow itself at around 13.10.

Weather permitting, it will be a spectacular show and one that properly celebrates and commemorates the incredible work of the men and women of the RAF over the past 100 years.

We are VERY excited to reveal the line-up for the #RAF100 flypast on 10 July. If you can’t make it into London, but are in the surrounding area, here’s the route the aircraft are taking in and out of London. Keep your eyes to the skies so you don’t miss out! pic.twitter.com/Rln2pBVCXY

Getting such a big flypast into and out of London was always going to have an impact on normal operations and need months of careful planning and coordination, however, everyone involved has been determined to do whatever they can to help make it a success.  By the end of the event, around 2,000 people from across the RAF, NATS, CAA and the affected airports will have been involve in either the planning or execution.

The first step involved understanding exactly what the RAF wanted to do, the airspace it would need to do it and the special temporary operating procedures we’d need to create for our own air traffic controllers to keep civil aircraft safely separated, while also keeping operational disruption to an absolute minimum.

At the request of the RAF, the CAA has put in place airspace restrictions for the day to help protect the safety of the large number of aircraft involved in the event. As a result, when the restrictions are in place, no other aircraft will be allowed to use the airspace unless it has specific permission to be there, such as the police or television helicopters.

Filming for BBC Breakfast about the flypast planning process

The whole thing will then be expertly choreographed with precise timing by the RAF controllers based here at Swanwick. Then, as soon as the flypast is clear, we’ll be ready to almost instantly restart normal operations and get passengers and aircraft moving again.

NATS and the RAF have long had a very close and special relationship and it’s been a pleasure to be involved in what will be a special day. Many NATS people have had previous careers in the air force, and today the UK is one of the few countries in the world where civil and military controllers sit side-by-side as a joint and integrated operation.

This closeness helps make planning these kinds of events that much easier, but it’s also a relationship that’s hugely beneficial to both parties. It means we’re more able to share airspace and coordinate traffic during day-to-day operations, but also in the event of a security incident in or around UK airspace.

So, fingers crossed the weather plays ball on the 10th and the air force gets the showcase they so richly deserve.

And from everyone at NATS, a very happy 100th birthday.

Are the aircraft holding off Southwold in Suffolk, just as they do for HRH The Queens Birthday flypast?. It’s nearer to me and saves going to London, and all that traffic.

No Steve, they will not pass Southwold (but that is the usual QBF route), instead they cross the coast just South of Aldeburgh (about 1km from the south side of the town). You will not see the light aircraft or helicopters, but there will be a mix of large aircraft and fast jets (about 60 or so). Crossing the coast approx 12:40-12:45, with the Red Arrows crossing about 12:55. They carry on towards Ipswich, passing to the South East, crossing the River Orwell about 2 miles South East of the Orwell Bridge.

Because we can be sure of the high professionalism of the RAF and NATS, I’m certain the operation will be impeccable, which is just as it should be.

Sam is Manager ATM Procedures at our Swanwick Centre and leads the team responsible for providing day to day support to both London Area and Terminal Control in addition to planning and supporting numerous special and non-standard events each year.

Sam has been a member of the Procedures team at Swanwick for the last six years and was promoted to Manager in February 2017. During his time he has overseen a number of complex changes and events such as The Tour de France, Head of State visits and Farnborough Air show.

Our Road-Map to Net Zero