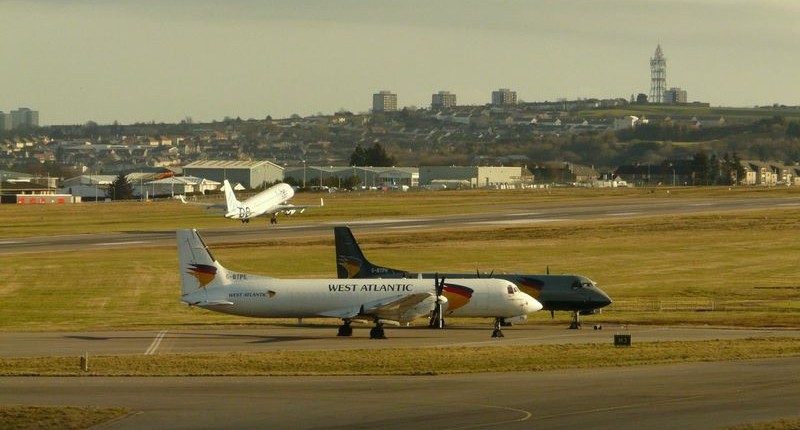 Known as the world’s busiest civilian heliport, Aberdeen Airport is a dynamic place with helicopters continually taking off and landing, giving it a real buzz. This being said, helicopters only account for 39% of the airport’s traffic with the remaining 61% being made up from fixed wing aircraft.

The variety and quantity of traffic provides a unique challenge to the NATS’ team as they need to integrate the different types of aircraft in a seamless fashion to maximise capacity.

At the time of writing, Aberdeen is Britain’s fifth busiest airport in terms of total movements with 3.76 million fixed wing passengers and another 0.5 million helicopter passengers using the airport last year. It is expected this figure will be even higher by the end of 2015 with new routes are being added all the time, such as the one planned to Gdansk, Poland in June 2015.

Helicopter taking off at Aberdeen

ATCOs at Aberdeen (not all work in the tower)

ATCO at work station in Aberdeen

ATCO at work in tower at Aberdeen

The fixed wing aircraft using Aberdeen range significantly in size. One of the most frequent visitors are British Airways  A320s operating  flights to and from London, and as an international airport, Aberdeen also handles  aircraft such as  KLM’s B737s, Wideroe Dash8-Q400s and BMI Regional E135s  flying to and from destinations outside the UK.

Besides providing air traffic control for business and leisure flights, and for air freight traffic, Aberdeen delivers a vital link to the North Sea oil and gas rigs, transporting people and much needed equipment. Tricky conditions such as strong winds, fog in summer and snow in winter provide further challenges to the NATS’ team in Aberdeen, with high waves around rigs and cloud cover also effecting flights.

Aberdeen is considered a lifeline to some of the Scottish Islands; for example to places such as Shetland, the Aberdeen-based Sumburgh Radar air traffic controllers are key to helping the local population stay in touch with the mainland, helping them access supplies as well as services not readily available on the island.

Safety is always a key consideration and Aberdeen has supported the adoption of Wide Area Multilateration technology, which uses signals from transmitters and receivers fitted to oil and gas platforms to track offshore flights. This enables surveillance to be provided in areas previously beyond radar coverage and provides environmental and financial benefits in terms of more efficient routes, in addition to the more obvious safety benefits.

The area served by Aberdeen is impacted by Danger Areas and contains large areas of ‘uncontrolled’ Class G airspace as well as a Class D Control Zone around the airport itself. The offshore operation covers airspace from Norwich (Anglia Radar area) all the way up and around the UK eastern seaboard to boundaries with Norway and Iceland.

Hear what John Millar, NATS’ General Manager at Aberdeen Airport has to say about the service his team provides to both fixed wing aircraft and the numerous helicopters. Aberdeen Airport is so much more than the world’s busiest heliport as this video shows.

Step inside Heathrow tower with our interactive 360 panorama

At last! An article that accurately shows what we do in the frozen north. Thank you.

Nicky is a recognised expert in the Social Media Community. Tweeting as @Nickyhants, she is also passionate about Social Media on other platforms, recognising its potential, especially how it impacts on traditional marketing and PR.

Joining NATS as Social Media and Community Manager in April 2013, Nicky is using her experience to identify how to improve NATS’ use of the medium, working with key business stakeholders to create and implement a social media strategy.

Nicky lived in Australia for 10 years, has travelled extensively and enjoys learning about other cultures. She also enjoys history, visiting museums, reading, listening to music, walking her rescue dog and spending time with her friends and family.